A cross country tiny house meet up was held today under the shadow of the Big Idaho Potato Tour giant spud.  Kristie Wolfe of Tiny House on the Prairie and Dave Raftery of Sonoma Shanty attended the event. Discussions included looking for undeveloped land in NH, off grid power, installing septic systems, insulating exterior cladding for tiny houses and the logistics of building a tiny house in Hawaii. 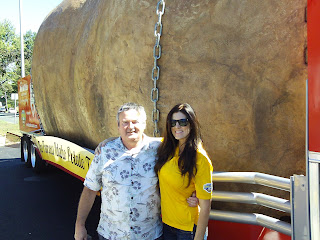 As many of you know, Kristie has been touring the country for the past 6 months as part of the Big Idaho Potato Tour. The tour is raising awareness and funds for the Meals on Wheels organization to feed seniors, as well as reminding everyone that the best potatoes in the world come from Idaho! Kristie gave me a tour of the inside of the giant potato. At about 30 feet long and 12 feet in diameter, this giant spud is larger than many tiny houses! There is a lot of room inside there. It is built on a steel frame, covered with foam and then a finish coat of concrete which makes up the exterior. There is a round door in the end of the potato which opens for access. I felt like I was going into a submarine! 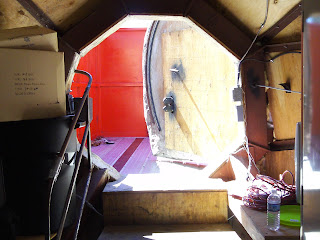 The event was held at a senior center and a 3 piece band played for the occasion. Everyone had a great time and the weather was a beautiful early fall day in New England. And 2 tiny house enthusiasts, living 2000 miles away from each other, are now friends thanks to a big potato. It was a good day. 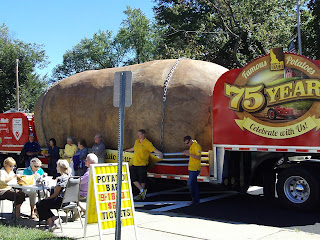