Nemo pictures and thoughts on a 'stealth' tiny house

A couple of weeks ago, winter storm Nemo came through with high winds and dumped 30 inches of snow on my town. At least I know that my Sonoma Shanty is pretty solid, having survived both Sandy and Nemo! Here are a few pictures of my Sonoma Shanty under a blanket of snow. 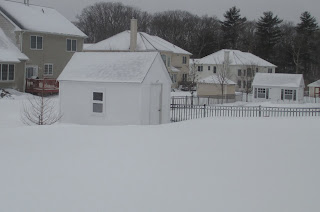 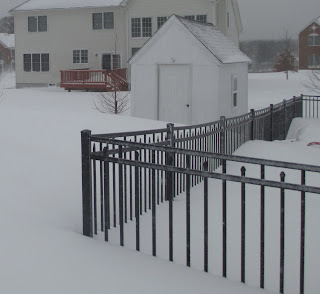 I've been thinking of how to disguise a tiny house into looking like a small barn or shed. So here is my scenario: buy some land in a fairly isolated area of the country (NH for me), no utilities, forested with only a dirt road onto the property. The tiny house would only be used for about 6 weeks of the year, a month in the summer and a week each in the spring and fall. The design would have to offer some security in the form of shutters when it is not occupied. Since most towns allow storage buildings up to a certain square footage to be built without a permit, that would be the design goal. If the tiny house looked like a small barn and had no outward signs that it was occupied, there would be less likelihood of problems with the local town. So how to make the tiny house look like a small barn / shed? Maybe have a fake 2 piece barn door that slides on tracks on the short end of the house or just opens out with hinges on the top and bottom of the outside of the doors. When the barn door is open, a picture window is exposed on that end; when the door is closed, it just looks like a small barn. Make a ramp that runs up to the fake door so it looks like you can move a tractor or boat inside. You could even have a beam with block and tackle at the roof line like old barns have to raise hay. To top it off, have a cupola on top of the roof with a weather vane! Figure out how to make best use of the fewest number of windows. (1 in kitchen, 1 small horizontal casement in bathroom, 2 in main living area, 1 upstairs in loft). All windows on ground floor would need removable, lockable shutters. The windows should let in enough light, while still not looking like a house. Don't have any pipes coming out of bottom of the house (or hide / disguise them); or just use a bucket under sink and come up with some way to drain shower. Propane line would go through the side of the house, directly to kitchen stove from outside tank. Since the tiny house / barn would be permanent, the dimensions could be 10' x 20' or 12' x 20' in size for more space than the standard 8' width for trailers. Might have to forgo the small deck off the entry door; that would make it look too much like a house.

My plan would be to spend  3 to 4 weeks on site to build the tiny house and get it weather tight. Camp out in the beginning with a tent and canopy. Move inside when the roof goes on. Get a small generator to run power tools. Build on pier blocks, with 2 or 3 main support beams. Put 6 inches of gravel under the blocks to reduce frost heaving. Build the platform and insulate underneath with 12" fiberglass. Put screening on bottom of the platform to keep out critters and maybe ply scraps around the perimeter for rain splash. Would need to cover the platform with a tarp in rainy weather until roof is on. Build the wall sections about 8 feet long so they are easy to raise. Sheath the wall sections while on the deck, so everything is square when it goes up. The entry door, with deadbolt lock, would be along one of the 20' walls. Use Sonoma Shanty framing for the top plates and the roof. Build scaffold on each side with 2x4s for roofing work. Finish inside at my leisure. Rig up solar panel and batteries for power; store them inside house when not occupied.

What do people think?